Before I get around to flashing my pictures of leaky-ceilinged guestrooms and Indian food I have a few things to mention.

1) I’ve filled up another blog. This will be my last real post here, making “Penang, Again (Part Two)” the first entry in the as-yet non-existant new blog, which feels a bit awkward to me, but there’s not much to be done.

2) I’ve filled up my passport! I suppose this is news that would have been worth incorporating into the actual body of one of my Penang entries since it happened with the insertion of my new Non-Immigrant B visa. I guess this means an impromptu trip to Bangkok in the near future for the addition of pages, a process that seems simple enough (but my own mother just called me a “sweet, innocent child” for believing that any process in Thailand could be classified as “simple,” so we’ll see).

3) Happy Chinese New Year! Xi nian kuai le! In Malaysia, where there is a large Chinese population, it was incorporated into just about every advertisement we saw or heard and I thought it was meant to be somewhat of a big deal in Thailand as well. Aside from the odd strand of loud fireworks (poor Ollie 😦 ) it doesn’t seem to be the case. Nevertheless, here’s hoping the Year of the Dragon is swell. Last year was the Year of the Rabbit (“my” year, as it were); I bought two rabbits as pets and they died. I won’t be getting any dragons this year.

Alright so let’s get on with it!

Penang. We left last time with the feeling that we’d been rushed through the whole experience and this time was no different (though we did spend three nights this time around as opposed to two). Looking back our trip was definitely very go go go go go, but we enjoyed ourselves and were able to devote our time to some different activities from the last go-’round to set the experience apart. 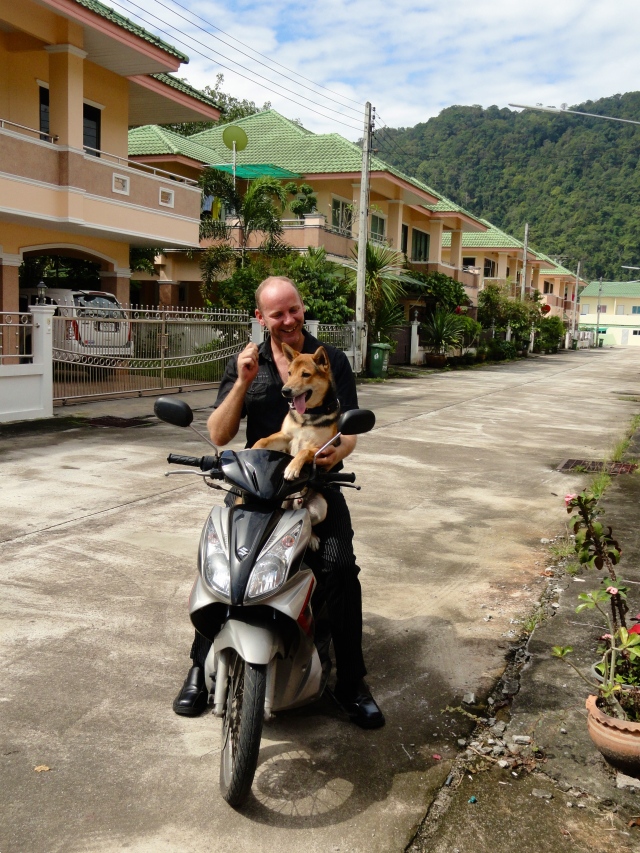 of course, first order of business: sort out the pup. thanks uncle henk!

We’d considered taking a train this time, but for reasons poorly-explained to us (they were full? there was no train?) this was impossible. So we went the same route as last time: 2.5 hour minibus from Thung Song to Hat Yai (130B; $4.30), 4-6 hour minibus from Hat Yai to Penang (350B; $11.70. And I’ve included a 2-hour span because it really depends how quickly you’re able to move through immigration and how many out-of-the-way stops the bus driver will make to drop people off on his way to George Town: the end-of-the-line stop that was our destination). Everything went quite smoothly, but we were blindsided by an hour time-difference upon arrival and weren’t thrilled to be milling about the streets at nine PM to find a guesthouse.

Though we’d been happy with our experience at and the service of Banana Guesthouse last time, we heard there were places that could assist with your visa for cheaper, namely Jim’s Place, a short walk down Jalan Chulia (George Town’s “main street”). The charismatic, shirtless Jim did offer us a 20RM (200B; $6.70) option where he took care of our paperwork and taxis but we actually went to the embassy to drop off and pick up. It seemed reasonable, and we went for it. (His fee for doing everything including the drop off and pick up was the same as Banana’s– 40RM).  He also suggested we check out his rooms, which were also 20RM– a bargain, no doubt, but Wayne astutely observed they brought back memories of his bedbug episode in India, so we said we’d continue looking.

The joke appeared to be on us, however… a walk down Love Lane and Jalan Muntri found us confronted with many a full guesthouse. Finally we arrived at W[estern]&O[riental] Café/Guesthouse, where there were two triple rooms available for 45RM. It was more than we were hoping to pay (and we didn’t need a triple room), so we said we’d keep looking briefly and come back. As we re-entered the backpacker-laden streets, seemingly full of others in search of rooms, the W&O lady’s last words were echoing in our ears: “Hopefully they’re still available later…” It didn’t take us long to come scurrying back and hand over the cash.

A few cans of beer and some mediocre pizza at Reggae Penang found us exhausted and ready for bed, but the night’s excitement was far from over. Sleep didn’t come easy in the sweltering room, and the pouring rain that came out of nowhere at three AM didn’t help. And it wasn’t just the noise of it that got us– suddenly something struck the roof, my face was covered with dust, and about three seconds later our feet were receiving the splashback of the deluge that was now pouring through our ceiling onto the floor between the two beds (a detail that didn’t escape the grumpy nightwatchman, who was inclined to let us keep the room since our bed itself wasn’t being dumped upon.) Thankfully the last available room had escaped the hoards of room-seeking backpackers and they moved us without a fuss.

chinese new year lanterns set up across from reggae penang.

splishity splash on the floor.

and into the hallway. it was a lot of water...

We were told to be back at Jim’s at quarter to nine the next morning so we could be on our way to the embassy as it opened and have our paperwork filed straightaway. This went as smoothly as we could have hoped, leaving the rest of the day open for motorbike renting, mall perusing (we had our sights set on catching a film on the big screen and indulging in some sushi that evening, both of which we’re a bit deprived of on a normal basis, and both of which we were able to encounter at the First Avenue shopping mall– an eight story structure that blows anything in Thung Song out of the water), Indian-food lunch having, coastal drive taking, and beach bumming. My photo upload capacity didn’t take me all the way to that last bit so I’ll halt my narrative here, start the photo reel, and leave you all in desperate suspense until the release of the third installment of this blog. (So… two days from now probably.)

i realized only way after the fact that the original subject of this picture was that man on the balcony in the distance. 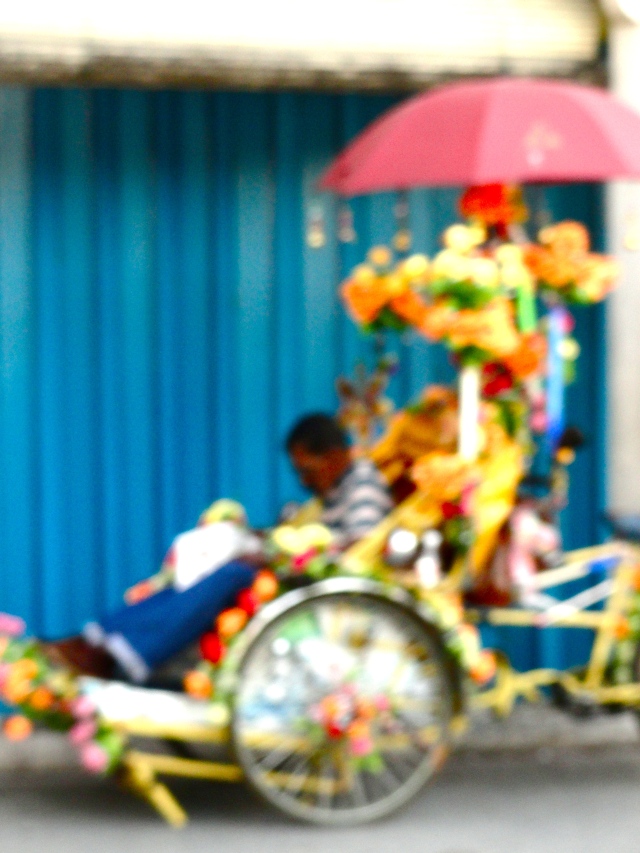 view from the eighth floor of the mall. this sounds ridiculous but we couldn't even remember the last time we'd been that high up! 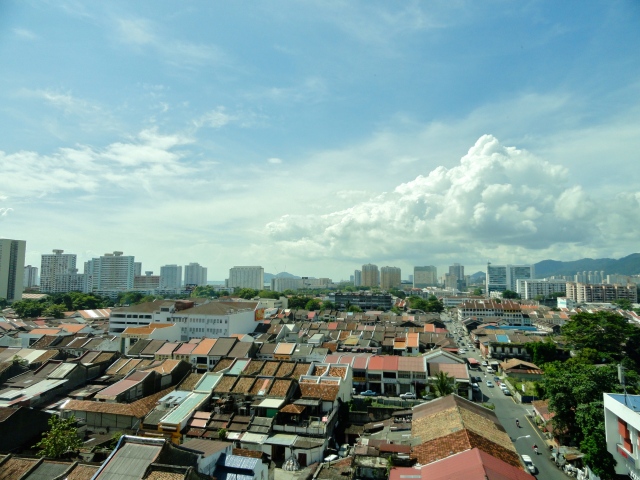 view from the gas station?

a delivery bike, endearing you to 'let us to serve you our best.' and if you can't see, basically ANYTHING can go into a claypot briyani, the chicken is just the most enthusiastic.

a happy boy in little india!

the famous dripping faucet of penang. 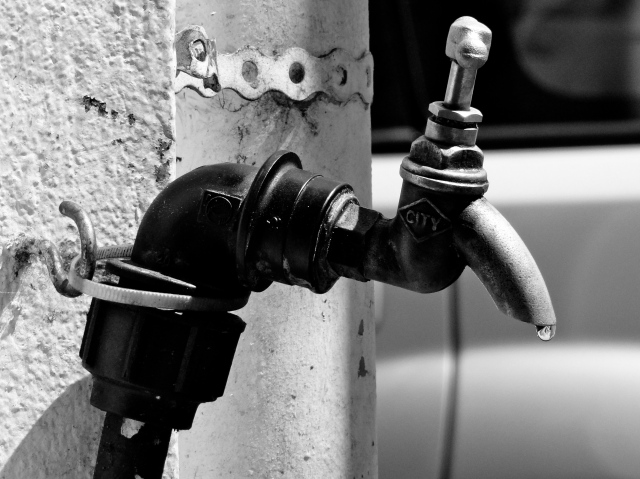 (not really, just playing around while waiting for our food.)

and here it is! mushroom masala and potato/cauliflower something-or-other, and, of course, naan (goes without saying, doesn't it?).

driving along the coast on our way to the beach. 20 minutes of high rises.

Alright and that’s really all she wrote this time around… I’ll see you on the other side!

I'm not actually a sleeping monk (though if I had my druthers...).
View all posts by Angela →
This entry was posted in Penang and tagged george town, malaysia, penang, visa run. Bookmark the permalink.

3 Responses to Penang, Again (Part One)